I first received the shock in Facebook.  My friend and colleague Zvi Dor Ner died Thursday April 6, in Cambridge, MA, the city where I first met him over 40 years ago.  Although not unexpected, due to the the graveness of his disease, the news shook me. We both had the fortune of sharing, almost always smiling, a friendship of more than 2000 years, 500 of them in exile.  Thanks to him I discovered Sepharad, the Jewish Spain that the Catholic Kings Ferdinand and Isabella wanted to exterminate in 1492, without success. 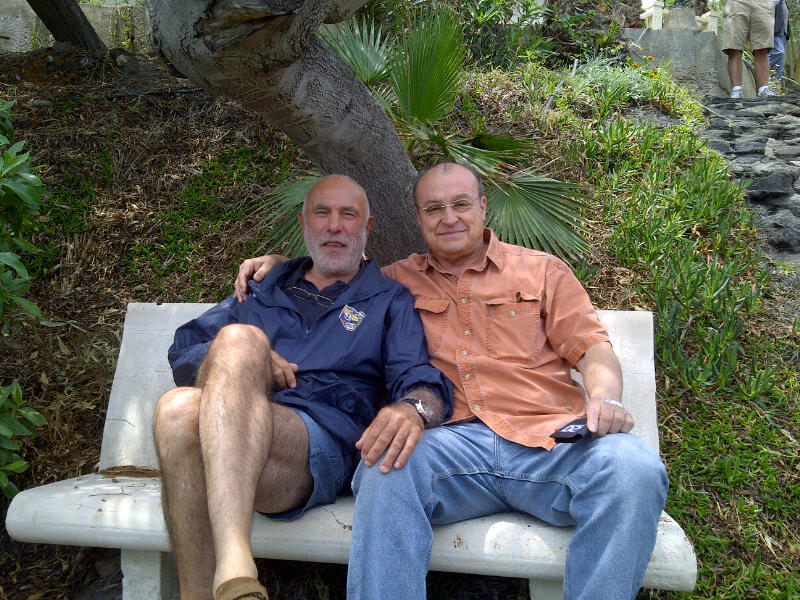 Zvi Dor Ner and me during his last visit to our house in Almeria.

I went down to the basement of our house outside Madrid, where I am writing these lines, and put in the last CD that we had shared together:  “Sons of Sephardians.”  They say that music and food are the most difficult heritages to erase from the memory of peoples.  These songs in minor -like many Spanish songs of yore- are sung in Ladino, the medieval Spanish which, after their expulsion from Spain, the Sephardians took with them around the world.

Together we savored the Mazapans of Toledo.  Ay, Toledo! The capital of three cultures:  Jewish, Moorish, and Christian.  I was educated in a Catholic school by friars, in the Spain of the Fascist dictator, Francisco Franco, an ally of Hitler and Mussolini.  For this, my knowledge about the Jewish people was not only poor but perversely distorted by National Catholicism and the anti-Semitism of my educators.  The Spanish language still continues to be impregnated with anti-Semitic expressions.

The authorities of the Fascist regime of generalissimo Franco barely recognized the Holocaust of the Jewish people at the hands of the Nazis.  And children sang “Lilly Marlem” in Spanish with lyrics praising the Spanish troops of the Blue Division that Franco sent Hitler in World War II.  Not even the communists, who supported the Palestinian cause, were free of anti-Semitism.

My father-in-law, Alph Westley, fought against the Nazis in World War II and saw in person the extermination concentration camps and cremation ovens soon after their liberation by the allied powers.  My wife, Ana Westley, was astonished to hear in Spain the lies from both communists and fascists  that the Holocaust never existed and was just Allied propaganda. Thanks to my re-education by my American wife, I shed my traditional Spanish anti-Semitism. 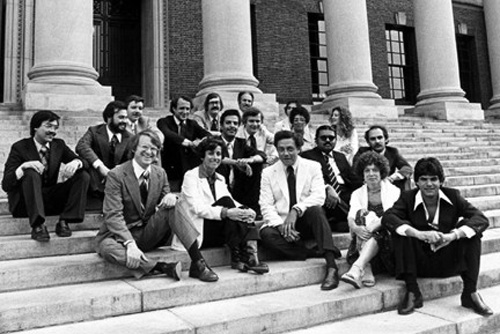 The Harvard Nieman class  (1976-1977). Jamil and Zvi in the first and last rows on the right  I am the bearded one in the last row.  Jim Thomson is wearing a white jacket.

With a cultural, incomplete, and at times contradictory Arab-Israeli baggage, I arrived in 1976 at the Nieman Foundation for Journalism of Harvard University.   It was there that I met Zvi Dor Ner of Jerusalem Televisión and Jamil Mroue, of an Arabic daily newspaper of Beruit.  The dictator Francisco Franco had died less than a year ago.  In my face, there were still signs of a severe acid burn that I suffered when I was kidnapped and tortured by the Intelligence Brigade of the Dictatorship.  I was interrogated about the sources for an article I wrote about purges of moderate military commands within the Civil Guard.

It was easy to become a friend of Jamil.  The traditional Hispano-Arabic friendship favored this.  We both played squash and frequently topped the game off with breakfast at the Dunster or Kirkland Houses to which we were affiliated.  In the “beer and cheese seminars” we celebrated every week in the Nieman House with some famous guest, I used to support the pro-Palestinian theses of Jamil on the conflicts of the Middle East.  Naturally, Zvi Dor Ner, pro-Israeli, dissented. Thus began a unique weekly debate trio:  emotions and reason crossed between as  in a fencing match.  Without bloodshed.

When my English improved, and favored by the “six pack” of local beers, I could argue with both Zvi and Jamil, without academic restrictions, in the bars of Harvard Square.  Jim Thomson, the curator of the Nieman Foundation of Harvard, sent the three of us to public presentations in venues such as the Boston World Council an others about the conflicts in the Middle East and the three cultures.  Thus was born our triple alliance both public and private, of Jews, Moors (Arabs) and Christians: a friendship that has grown and survived up to the last breath of our dear friend Zvi Dor Ner last Thursday morning. 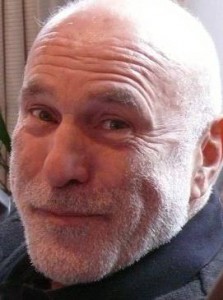 It was impossible to know Zvi and not love him.  His smile, almost permanent, that changed only with his resounding belly laughs, accompanied even his most serious and profound arguments.  I soon supported Zvi’s thesis about the need for the new pre-democratic Spain to officially recognize the State of Israel if Spain were to play a role in favor of peace in the region.  I published a column in the Op-Ed page of the New York Times (Spain and the Arabs) on April 23, 1980.

Ten years after meeting Zvi, on January 17, 1986, destiny required the help of Zvi to emit the exclusive news in the morning TV news program “Buenos Días” of Spanish TVE that I founded, produced, and anchored: Spain and Israel had at last established diplomatic relations, one of the projects that I had dreamed about with Zvi and Jamil in the bars of Cambridge.

We needed to open the studios of Jerusalem TV, at 5 AM their time,  to connect via live satellite with some colleague there to comment on the exclusive news that no other journalist knew.  It was difficult.  But not impossible.  Especially for Zvi.  It was to jar awake many in Israel.

At 7:30 in the morning, Spanish time, I opened my program with a special greeting that must have surprised the viewers in all of Spain.  I said, “Shalom Israel…”  There was no answer.  The techs adjusted the connection.  In less than a minute, while I gave the news of the recognition of Israel by Spain, a clear, strong and parsimonious voice was heard in Spanish homes connected to the first morning TV news show in Spain:  “Buenos días, Sepharad.”

After 500 years of intolerance, Spaniards at last invited the Sephardics -Spaniards long in exile- to come home.  Thank you, my friend Zvi. It happened. Rest in peace. 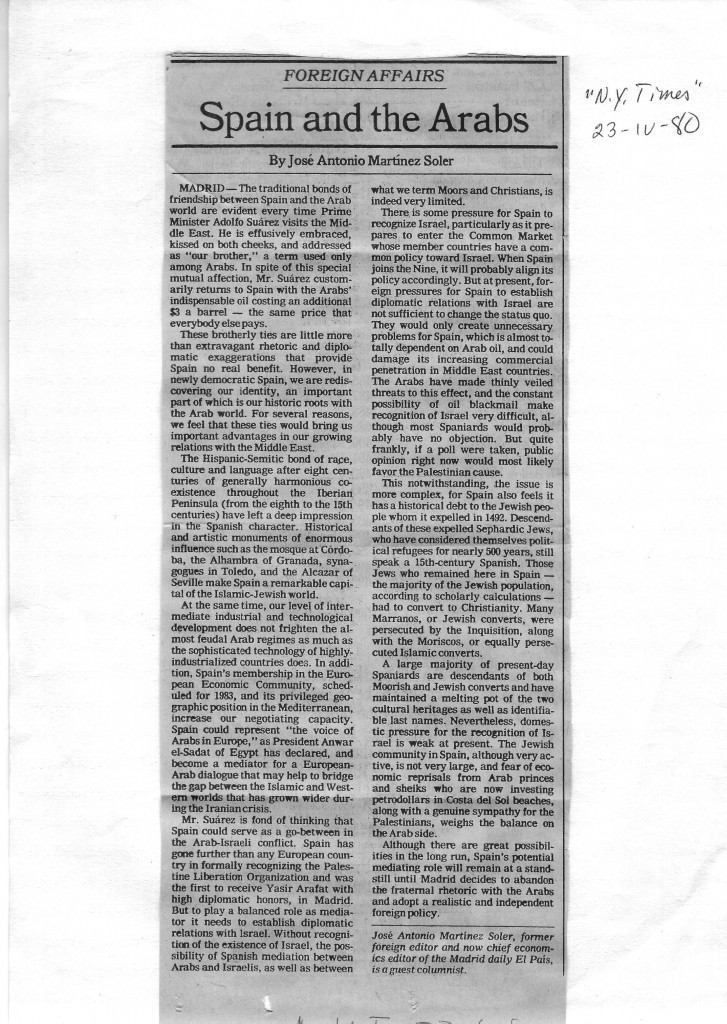